Mickey Spades, despite his best efforts, will never be bad ass.  Sorry Mickey, someone needs to tell you and since you don’t listen when I tell you in person, I thought I would tell the internet.  In fact, Mickey is probably reading this and wondering to himself ‘why won’t I be bad ass?’ and it is a fair question.  Mickey seemingly possesses all of the attributes of someone who could go on to do great things: he is young, fit, motivated, and has partnered up with a group that offers him experience and a pathway to greater endeavors.  Mickey, however, somehow always misses the more subtle lessons that are being taught to him.

The first lesson that Mickey can not grasp is to be on time or, preferably, be early.  Mickey is perpetually late.  The world’s best mountaineers pride themselves on alpine starts and being on the mountain when it is in prime condition.  Furthermore, mountaineers like to be first out of camp in order to get out before and in front of less experienced people.  Ski culture has long lived by the ‘first chair, last call’ motto, reminding its devotees of the importance of being up early and making the most of the day.  Even boulderers (perhaps the laziest outdoor athletes) will wake up early in the warmer months to take advantage of the rock’s enhanced friction before the heat of the day makes the rock feel greasy.

Me getting ready for a run

Mickey can barely get out of bed for a early afternoon bouldering session. I have no idea what he would do if faced with a two o’clock am wake up.  Thursday was a perfect example of Mickey’s struggle with punctuality.  We received somewhere between twenty and twenty-eight inches of snow the night before and the plan was for Luke, Mickey, and myself to meet at nine at the ‘The Stash’ to score some powder runs.  Mickey was psyched to ski his first backcountry powder day, but not so psyched that he would be on time, showing up roughly an hour late (I had already ridden two half-runs by the time he arrived).  Consider this lesson two Mickey Spades: you do not screw with powder days, they are sacred.

On the way up

Mickey Spades also spends too much time trying to be cool and not enough time worrying about what he is doing.  On an average outing with Mickey Spades you soon realize that he spent hours the night before pondering what to wear and what would look the coolest in photos.  It is even more shocking when you realize some of his outfits have been planned weeks, perhaps months, in advance.  I have posted pictures of Mickey from today’s outing; Mickey would appreciate it if you notice that the jacket, pants, gloves, and helmet all match.  He would also appreciate if you notice that his goggles match his boots.  In comparison, my decision making for the day was what is clean and what is dry?

Calling it a day

True bad asses are less concerned that what they are wearing is cool and more concerned about doing cool stuff.  I highly doubt Chris Sharma worries about how his next route will look in the magazines; rather he concerns himself simply with climbing the next great route.  Real bad asses let their actions do the talking, not their outfit.  If you ski steep, committing lines or climb hard routes people do not care if you have the latest Mountain Hardwear coat on, they care about what you did.  Mickey Spades, if you are still paying attention, this is lesson three. 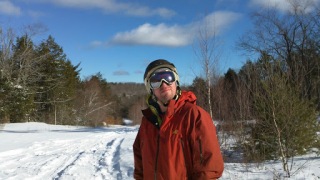 So while Mickey Spades has poured his energy into carefully crafting a perfect image of a skier, he has neglected one important point: he can barely ski.  Instead of focusing his energy into getting better or skill development, he has worked on his image.  I did not check, but I am sure Mickey Spades packed at least three high-end jackets the other day but neglected to pack something as simple as a first aid kit.  Mickey is trying to define himself through his appearance and not letting his actions define him.

I imagine that at this point Mickey Spades is feeling like I have been a little hard on him.  Perhaps I have piled it on a bit; I am sorry Mickey but this is for your own good.  Also, as Luke reminded me, Mickey is still young and has a chance to grow out of this stage or learn some valuable lessons.  Mickey Spades will maybe one day demonstrate the quiet confidence that the truly bad ass possess.  The attitude that they know they can do something before even doing it.

The fact is Mickey gets out way more than I did when I was his age and has surrounded himself with a pretty good group of partners.  So maybe there is hope for Mickey Spades and if Mickey proves to be hopeless well there is always the humor of it all.  I will never stop finding humor in the stopping to take facebook profile pictures, discussions over jackets, or his latest girl or girl problem (they seem to go hand in hand).  Mickey will always be entertaining and a great person to have along on a trip.  His constant energy and talking both lighten the mood of any endeavor and make you appreciate the silence on your solo routes and runs as you wait for Mickey to finally show up.

Luke on the entrance to the lower steep

Mickey getting into the steep stuff