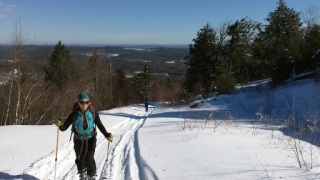 Katrina breaking up the bromance

A co-worker recently pointed out a trend of my recent skiing excursions that I had failed to notice: that they are short on female companions.  The same co-worker also pointed out that recent blog posts have had an undercurrent of bromance.  While in the spring, summer, and fall it was easy to find female companions for a day of sport climbing, bouldering, or hiking, it appears that my group has difficulty locating female companions for our winter ski adventures (I blame Mickey Spades – as the resident single guy and self-proclaimed stud, locating females should be his job). 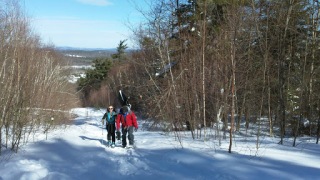 The comment on the lack of female companionship on these ski adventures, coupled with a recent trip to ‘The Stash’ on which Luke brought Katrina (a female, if I needed to clarify) has made me think about the different tones these winter trips have taken compared to the summer trips.  This past Thursday I met with Luke, Mickey, and Katrina to ski ‘The Stash.’  The tone of the day for me was to get a little bit of skinning and some easy runs in before going away on a three day resort ski trip with my extended family. 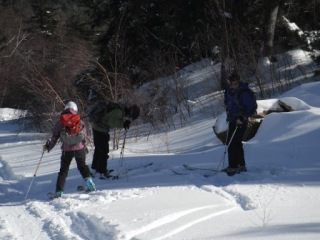 My goal for the day was to hang out with friends, get some vertical mileage climbed, get some fresh air, and not to get hurt.  My plans were immediately crushed when I received a text message from Mickey reading ‘we just picked up this girl and she is hot.’ I wish I had not erased the actual message from Mickey because, I assure you, it is one hundred times funnier than I can do it justice.  The real thing to note about Mickey’s message is that it oozed machismo, at which point I knew that Mickey would be out there to impress that day.

Katrina on the road

The day changed further as we all began suiting up for a day at ‘The Stash.’  In the parking lot (where normally a frat house atmosphere prevails), there was a more subdued air and everyone behaved a bit more dignified.  I, for example, skied ahead of the group to relieve myself, something that under normal circumstances would have happened in the corner of the parking lot.  Luke and I were both working on making our guest comfortable, or at the very least not acting inappropriately, hopeful that Katrina would have a fun day at ‘The Stash’ and join us for further adventures.  As I have said many times, you can never have too many people to ski or climb with; you must cultivate partners whenever and wherever you can. 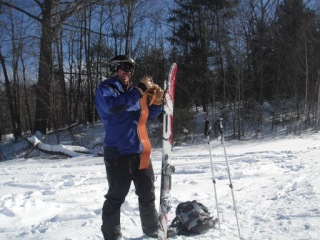 Despite a poor showing on the skis, I can’t help but laugh watching Mickey with the ladies

Where Luke and I were working on making Katrina comfortable, Mickey Spades wanted to make sure Katrina knew he was the man and that skiing ‘The Stash’ is nothing for him.  Mickey postured and talked making sure that everyone – Luke and I included – knew he was the man.  Mickey Spades did not disappoint us, as he truly brought his A-game that day: he was decked to the nines in the latest and greatest outdoor gear, with everything matching of course.  Mickey wasted no time bragging to his bros (Luke and I) about skiing Luke’s Icelantic Nomads and how he “destroyed” Blue Hills the day before on them. 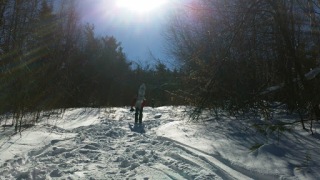 Luke hiking with the swallow tail

It was incredible what a female presence could do for the day.  I had chosen to bring my tele skis in an ongoing effort to get better on them at ‘The Stash’.  This is a process that has begun to feel long and frustrating, with as many bad days as good days and as many bad runs as good runs.  The conditions at ‘The Stash’ were less than ideal, and I found myself getting wrecked repeatedly by the harsh snow conditions and my intermediate (at best) skiing skills.  Over the course of my beating I found that a little piece of my inner Mickey Spades started coming out, as I made sure that everyone – most importantly, our guest – knew that if I had my snowboard I would be ripping up the trails.

Katrina appears to be having a good time

As I battled with my skis on ‘The Stash’s’ easiest trails, Mickey Spades was ‘throwing down’ some of ‘The Stash’s’ more difficult runs.  After ‘Spadebugging’ down some of the better runs, Mickey would let me know that the conditions were ‘amazing’ and that he was sorry I was not up there ‘shredding pow’ with him.  It really hurt my pride to have Mickey Spades sass me in front of a girl, and to be defenseless to it as I was having a supremely bad day on my skis.  I am now anxiously awaiting any opportunity to put Mickey in his place.

The skin track also picked up a faster than normal pace, as Mickey Spades would jump out in front to set a fast, hard pace only to stop, catch his breath, and make some small talk letting everyone know that this was no big deal for him and he could run up and down ‘The Stash’ if he wanted to.  He also let everyone know that his best time from bottom to top was just a little over ten minutes (we were averaging about a half an hour bottom to top). 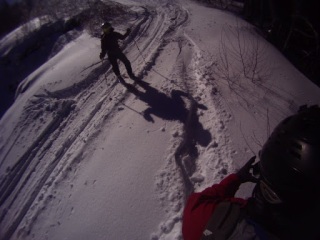 Looking back at Luke’s line

Despite the uber-masculine tone of the day set by Mickey Spades, there were some pleasant differences in the day.  As I was struggling with a tough day on the skis, a comforting word or two from Katrina was a pleasant change from the typical ribbing and teasing that normally occurs in a group of guys.  After a few words of reassurance from her, I had my best run of the day.

Enough fun, off to work

Katrina was a pleasant addition to the normal ‘Stash’ crew.  It was nice to have a female out with us to provide some balance to the guys and break up the apparent bromancing that has been happening.  Katrina’s appearance also allowed me a glimpse at Mickey Spades in his element and on the hunt.  Perhaps we should add more ladies in the future and subtract a little Mickey Spades…that would teach him to sass me.