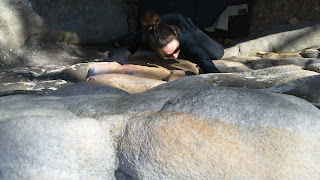 Ashley cruising up some fine southern slopers
There is something special about the climbing scene found in the deep south.  Every time I depart from a climbing trip from the South, I find myself missing the camaraderie, community, and relaxed atmosphere that is found in the Southern climbing culture.  Maybe it is a result of the more relaxed atmosphere found in the South in general, or perhaps it is the amazing quantity of quality stone that the South contains, but one way or another it is a great place to climb.  Having just completed my fifth trip to the “Deep South” to climb, there are some lessons we can learn from them to make our Northern climbing community stronger, and perhaps even find a way to make climbing a more rewarding and enriching experience. 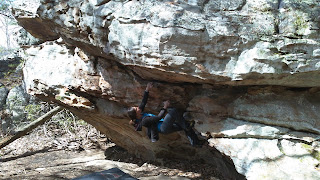 In Adam Henry’s guidebook to Horse Pens 40 he devotes a page to “the Southern Way,” which is his statement about what made the South a special place to climb and a place that housed a unique climbing culture (a culture he is scared of losing).  For Henry “the Southern Way” is what distinguishes the South from other great climbing regions, gives the South personality, and makes the South someplace special to visit.  I would encourage anyone who can to get to the South soon because the climbing is great and the atmosphere is something totally different than what we have here. In the Horse Pens 40 guide Henry lays out three principles that he believed represent the “Southern Way.”  Those principles are: Life is primary, climbing is secondary, and spray should come from a metal can. 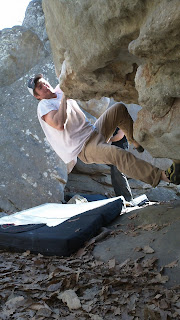 Life is primary is a simple enough formula to follow (and one I am currently not succeeding in), as it refers to making sure our efforts are focused on getting outside, being with friends, and climbing as much as we can. “The Southern Way” would argue that the time we spend posting photos on Facebook (guilty)  and blogging (guilty again) about what we have done is keeping us from getting out and doing.  “The Southern Way” emphasizes the importance of getting out, instead of making sure everyone knows how much you get out.  “The Southern Way” would also argue that the people who are getting the most out of climbing probably are not people you have ever heard of because those who are really out there living the climber lifestyle don’t have the time or the energy to be publicizing it. 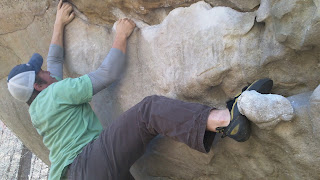 Making life primary transitions nicely to Henry’s second point about “The Southern Way,” that climbing is secondary.  Outside of the small climbing community very few people care how hard you climb; in fact you could argue that even inside the climbing community very few people care about how hard you climb. Honestly most of us will not be the next Chris Sharma, most of us will never sniff a sponsorship, and most of the world will not give a shit about what we climb or how hard we climb, so we better be climbing for ourselves.  For me, I enjoy the challenge of pushing myself against my physical and mental limits, and the camaraderie that I find with the people I climb with and the people I meet climbing.  I also especially enjoy the way a cold beer feels against sore hands after a hard day of climbing. 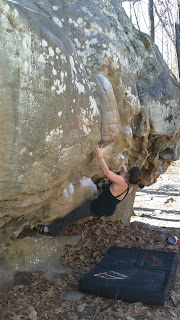 Henry says, “The only spray known to the Southern Way is that which held that finely puffed crown of hair to our wife’s 1989 senior picture.”  The objective of climbing should be to get out, have fun, and climb as much as possible.  We should have the ability to laugh at ourselves and our shortcomings as climbers as easily and as readily as we celebrate our successes.  We as climbers should be able to feel as proud of a friend’s send as we do a send of our own.  “The Southern Way” is about being part of a larger community; it is about being a climber, not being the climber. 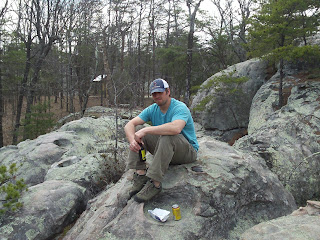 I love the Northeast, and am proud to be a Northeast climber who has learned and honed his craft everywhere from the slick urban walls of the Quincy Quarries to the seaside ledges of Acadia and everywhere in between.  However, every time I go South I marvel at their sense of community and the spirit of kinship that envelopes their crags.  I would love to see some of “The Southern Way” work itself into the Northern Way.