It Is Not Over Yet 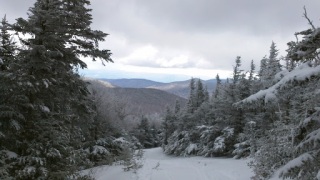 View from halfway up Mount Moosilauke

With everyone getting excited about the recent surge of spring-like weather, many of my friends found themselves hanging up the down jackets and putting the skis away, while starting preparation for the impending spring season.  Despite my friends’ assumptions that spring was here to stay Mother Nature had other plans, hitting us with her own version of an April Fool’s joke that dumped anywhere from eight to twelve inches of snow in New Hampshire.

Doug and Mickey in the skin track
With news of the storm and Saturday off from work, Doug, Mickey, and I headed north in search of some late season freshies.  Our original plan was to either hit Tecumseh or venture further north to Cannon to skin the mountain’s backside and ski the resort side.  However, with warmish temperatures predicted, and not wanting to share the potential last freshies of the season, we headed to Mount Moosilauke for some backcountry skiing. 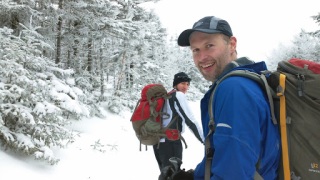 Doug and Mickey enjoying pleasant conditions below tree line
We parked our car at the beginning of Mount Moosilauke’s Carriage Road, applied skins to our skis, and set off with the sun shining and the temperatures hovering in the low to mid forties.  We made fast time up the trail, thanks to comfortable temperatures, an impressive eight inches of snow, and the desire to make some turns.  The only drawback of the morning was that we were following in someone else’s tracks.  Unless we were extremely fast, it did not look like we would be getting first turns.  Times like this make you wish you had sacrificed a little sleep for an earlier start to the day…it also makes you wish you lived a little closer than two and half hours away (we later learned that the two groups in front of us were from the Concord area of New Hampshire). 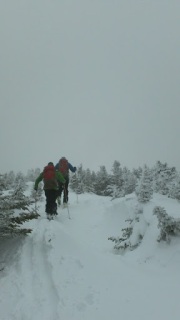 Heading toward the summit
About half of the way on our ascent of Mount Moosilauke we met the group that was out in front of us. They were on their descent and enjoying the late season fresh.  Speaking with them, we learned that they had chosen to skip summiting the mountain, informing us of high winds and low visibility above tree line. While we were anxious to lay some tracks, we were also excited to see what conditions above tree line looked like for ourselves, and began to anticipate some harsh conditions in front of us if we hoped to summit the mountain. 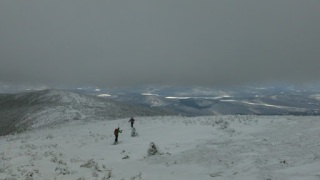 Doug and Mickey skiing from the summit
We then met another group who confirmed the above tree line conditions for us, which caused us to pause and discuss our options.  We all agreed that summiting was important for us, and that despite the high winds and poor visibility we would be within our comfort level.  As we gained the ridge and approached tree line, you could feel the wind pick up and see the heavy cloud cover.  We took the opportunity to add layers, goggles, and heavy gloves in preparation of entering the weather.

Skiing toward the trees
Stepping out of the protection of the trees, we quickly realized the full force of the wind as it – on more than a few occasions – attempted to knock me off my feet, gusting consistently between fifty and sixty miles per hour.  We found the visibility better than the previous parties and did our best to ignore the wind as we forged ahead to the summit.  At the summit, we spent little time celebrating our success and quickly skied toward the protection of the trees and the soft, fresh snow hidden in them.

Looking across the ridge
After gaining the protection of the trees, we de-skinned our skis, reflected upon the summit for a moment, and sought after the real purpose of the trip: freshies.  Despite being beaten to the snow, there was plenty left to go around and we enjoyed Mother Nature’s late season gift as we swiftly descended the terrain that we labored up not long ago.  The snow was beautiful, soft, and light on the first half of the descent, getting stickier and heavier on the descent.  About halfway through our descent, it even decided to start snowing again, giving the day a distinctly wintry feel.  Every turn we made increased the smiles on our faces as we quickly approached the car and the end of run.

Spadebugging
Moosilauke was the right choice for the day and proved to be a fascinating trip as we encountered every type of condition, from sunny skies on the approach to full winter conditions above tree line.  While we did not get first tracks, we took satisfaction in being the first party to reach the summit that day and ski down.