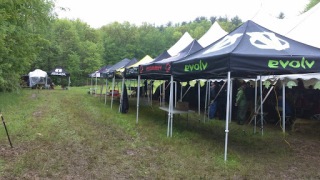 Eastern Mountain Sports rolled out some big names for their Gunks Camping Climbing Convergence a week ago.  In attendance were all of the normal players you would expect to see at an EMS camping/climbing seminar:  La Sportiva, Evolve, Five Ten, Mammut, Petzl, Black Diamond, Sterling Rope, Big Agnes, Osprey, Gregory, Nemo, Contour, and GoPro.  I am sure I am forgetting someone and for that I am sorry.  It is not my fault as a few late nights by the campfire mixed with a lot of recent travel has turned the past month into a total blur.  While the attendance of these companies is surely appreciated, it was the special guests who really stole the show.

Making a guest appearance was Wayne Gregory, founder of Gregory packs.  On Wednesday morning Wayne gave an informative, interactive, and entertaining presentation on how his packs are constructed and how to properly fit someone for them.  I would go into further detail but my mind started to wander after he mentioned his eldest daughter resembles Cameron Diaz.  After that I drifted off, imagining life married to the Cameron Diaz look-alike daughter of one of backpacking’s greatest innovators and entrepreneurs.

The thing about Wayne Gregory is that I could probably pick out one of his packs across a mountain ridge, but I had no idea what he actually looked like.  If someone had not clued me in to who he was, I would have spent a good deal of time trying to place who exactly he was at Eastern Mountain Sports.  In fact, if I were walking down the street I would have a lot better chance of noticing his daughter than of noticing him.

On the climbing side Eastern Mountain Sports brought Sonnie Trotter, Matt Segal, and Tommy Caldwell to spread the psyche to our staff.  On Tuesday night Matt and Sonnie delivered slide shows to a captivated audience, while one lucky EMS employee spent Wednesday morning cruising Gunks classics with Tommy Caldwell.  It was a fantastic opportunity for our staff to interact with some climbing’s most influential personalities and for us to meet with the people on the cutting edge of climbing.

As I sit here a few days later reflecting on our Gunks Convergence, I am struck by a funny thought.  I wonder how many people really care or are even interested by these people outside of our strangely insular outdoor community.  For me, standing next to Tommy Caldwell was the equivalent of a die hard Celtics fan finding himself at the same party as Larry Bird.  Speaking with my friends and family following the Convergence, I would immediately speak about meeting the aforementioned ‘celebrities’ only to be met with “Oh…who is that?”  It is the same response I give my younger sister when she tries to explain to me about reality television personalities.  That is, it is a response filled with indifference and wonder at how someone can waste their time with such silly things.

In fairness it took me more than a few moments to pick Sonnie Trotter and Matt Segal out of the crowd at the Gunks.  As Ashley and I worked at chronicling the event and helping out where needed, Sonnie Trotter passed by me multiple times.  Every time Sonnie Trotter passed me I thought to myself, “he looks familiar, I wonder what store he works at?”  until it finally dawned on me, “that’s Sonnie Trotter.”  The same can be said as I looked across the big tent where we all sought shelter from the rain and I wondered “what store is the scruffy looking guy across the tent from?  I wonder what he is talking to Tommy Caldwell about?  Wait a minute…that’s Matt Segal.”

I wonder if I would have been able to pick them out given different circumstances.  Let’s face it, the best place to hide a climber would be at a convergence of them.  It was hard to differentiate the mud-covered, scruffy looking sponsored athletes from the scruffy looking, mud-covered EMS employees.  In reality, there was probably not a lot of difference between Sonnie Trotter, Matt Segal, or even Tommy Caldwell from the people in attendance other than the fact they climb a lot harder.  Everyone there shared a passion for the outdoors, climbing, and having the best couple days possible in the Gunks.http://www.gregorypacks.com/