Should Have Brought Crampons

It took me about one minute as Doug and I entered the woods at the base of Mount Tecumseh to realize I should have brought crampons.  Doug and I have been using Mount Tecumseh over the years as a place to practice backcountry skiing principles (layering, nutrition, transitions) as well as build fitness.  In the numerous ascents over the years, I have never actually donned my crampons despite carrying them up the mountain numerous times.  Somewhere along the line, I just stopped bringing crampons with me, as all they ever did was to add weight to my pack.

The night before as I packed for our trip to Mount Tecumseh, my vision of the trail was that it would be void of snow at the bottom and somewhere at the halfway point we would encounter enough snow to make skinning a viable option.  My notion of the mountain’s condition was quickly dispelled as the trail was covered entirely in ice with only some of the trail’s larger rocks sticking out of the ice.  I knew we would be in for slow going, until Doug pulled his crampons from his bag (I then knew I would be in for slow going).  I was shocked to discover that Doug had been packing his crampons all along, even though he has also never used them on Tecumseh.  In hindsight, Doug was a boy scout; apparently there is something to that ‘be prepared’ motto of theirs.

Doug transitioning for a second run

Despite my lack of traction, Doug and I made decent time up the mountain.  We were fortunately sped up by the ice turning into a mix of ice, rock, and softer snow near the mountain’s mid point.  Furthermore, we enjoyed much better than expected conditions on our ski descent.  They were seemingly blowing snow on every trail on the mountain.  Our quick time and the decent conditions led Doug and I to re-hike the lower half of the mountain again in order to get a few more turns in.

Overall, we had a good day skiing and it was great to get back up north again (it had been far too long since my last visit).  Also, I learned a valuable lesson about preparedness and will once again rethink how I pack/plan for future forays. 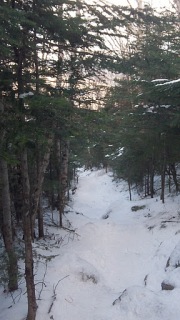 Looking up the trail, you can see the ice gave way to “snow”