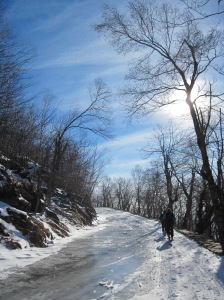 Skinning up the backside of Mount Wachusett

I’ve always wanted to live in a mountain town. Years ago, when searching for a new career, I was drawn to outdoor retail because it provided access to cool people, neat stuff, and it presented the opportunity to get a job in the type of place that good jobs can be hard to find in. Almost ten years have passed since I made the leap and I find myself still with the same company (having cycled through a few locations), but still not living in the mountain town of my dreams. When I took this job, I envisioned myself in North Conway, Lake Placid, or even somewhere in Vermont. Instead, I’ve found myself working in central Massachusetts, living in glamorous locations such as: my parents’ basement, downtown Worcester, and currently Westminster, MA. Having been in Westminster for little over a year now, I think I may have finally found my mountain town. 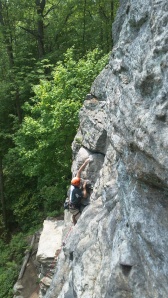 Climbing at Farley, about a half hour down the road

While Westminster is a far cry from the mountain town I envisioned living in (think North Conway, NH), it has subtler charms than the cities and towns that grace popular “best place to live” lists. Westminster might not have Cathedral Ledge in its backyard, a local climbing community made up of sponsored athletes, or multiple gear shops lining its streets like North Conway, but it does sit in the middle of a bunch of great climbing. From my front door, I can be at Crow Hill–an old school climbing area that even New Hampshire diehards will travel to–in less than ten minutes. Within half an hour, I  can be at some of the best climbing in Western Massachusetts; if I choose to head east, and the weather is right, I can be ice climbing at the Auburn Ice Canyon in under an hour. If the weather is terrible, we sit in the middle of two great climbing gyms, which help keep us tied into the local climbing scene. In addition to all of the great local climbing, we’re located minutes from the highway and can take an easy day trip to many of the Northeast’s destination crags. 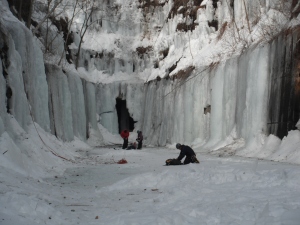 As much as I love climbing, cycling seems to be the sport that most captures the town’s attention. In the warmer months, you’ll often find more bicycles on the road than cars, and more often than not the cars that you see have bicycles stacked on top of them. People frequently make the journey toward Westminster to sample some of the best road cycling I’ve ever experienced. It’s not just “serious” cyclists that are heading out here either; for every paceline that zooms past, there is a recreational cyclist in baggy shorts or someone riding an upright bike. The combination of quality roads, a beautiful pastoral landscape, minimal traffic, and a cycling-friendly community has cyclists flocking to Westminster. Even with the snow on the ground in the past month, it was not unusual for me to encounter at least one cyclist still out hammering on my way to work. The cycling is so good that this summer I found myself falling in love with cycling all over again as I established new loops, explored new rides, and challenged myself on the area’s many hills. 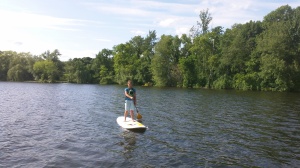 SUPing on a local lake 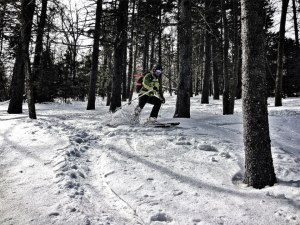 Tree skiing at a local stash…photo by Luke

When winter arrives in Westminster, the energy devoted to cycling the rest of the year turns toward snowsports and the town takes on the feel of a small ski town; bikes on top of cars are replaced by skis and boards, and the markets and shops are frequented by people still clothed in ski gear. Not to be confused with with larger, more glamorous ski resorts, Mount Wachusett provides a great place to make some runs before or after work with enough terrain to occupy a couple hours. Living so close to the mountain means that I am often the first one there on a powder day. Also, they have a pretty generous up-hilling policy and you are welcome to skin on the trails before the mountain opens and after the it closes. If you can’t make it off-hours to skin on the trails, there are an abundance of trails adjacent to the ski resort and, with enough snow, skinning on them is fantastic. If you get bored at Wachusett and the snow is right, there are a few secret stashes that hold great backcountry skiing withing 30 minutes. 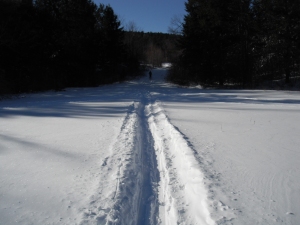 The area holds an endless supply of trails to run, hike, and mountain bike on. There is also an abundance of lakes and ponds to satisfy anyone’s paddling urges, and an amazing swimming hole. Did I mention we have a brewery? That’s right, Wachusett Beer is brewed a mile from my front door. And while we may not have an abundance of cool gear shops, there is a neat little ski/bike shop right across the street from me called All Tuned Up. Perhaps the best part about Westminster is that we get a taste of mountain town living but are still only an hour from Boston and an hour from Providence…and did I mention we have a brewery? 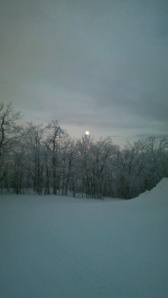 ← The Good, the Bad, and the Ugly (Slightly graphic)
Balancing Act →