Everybody’s Working For the Weekend

The ski weekend is a rite of passage for every skier. At some point in your skiing life, you graduate from going to the (likely small) local hill to going to a bigger destination mountain to eventually spending a whole weekend focusing on skiing. (In my mind the next step in this progression is  is living in a van in the mountain’s parking lot, but perhaps a ski week comes before that). While the idea of a quintessential ski weekend differs among skiers–for many of my friends it means sleeping in their cars and getting in as much vertical as possible–but I believe most people envision the classic New England setting of friends huddled around a roaring fire, reliving lines skied, crashes witnessed, and near misses after a long day on the mountain. As much as sleeping in the car appeals to me, when I was offered the opportunity to tag along on a conventional ski weekend, complete with a bed, hot shower, fire place, and a mountain view from the balcony of a very nice condo, there was no way  I could pass it up.

After a day of rain, we got the perfect grey bird day

The group of friends on this ski weekend forced a slight change of pace from the hard-charging friends I normally find myself skiing with, as this group finds themselves wrapping up the day after about ten runs, considering it a big day. (In fairness, this group was populated more by the ski-twice-a-year type of person while a modest amount of my friends occasionally find themselves skiing twice a day.) More often than not I get lured into chasing vertical feet skied or number of runs made, but this group made it easy to sit back, relax, and enjoy a more leisurely pace to the day.

In spite of my attempt to have a relaxed attitude, I was blown away when, after only five runs, we headed inside for a cocktail. Normally when I head to the resort it is to ski as much as possible and, with the exception of the occasional bathroom break (or for a mid-day beer), stopping is not an option. In fact, stopping for anything more than the essentials (I believe a mid-day beer is essential) is seen as a poor form. So stopping after five runs, when my legs were just starting to loosen up, was a bit jarring but I got over it quickly. I’m not going to lie; I have no complaints with the pre-mid-day beer. I consider it the drinker’s equivalent to brunch and, while I love PBRs in the parking lot, a beer in the bar adds a certain level of civility to day drinking. 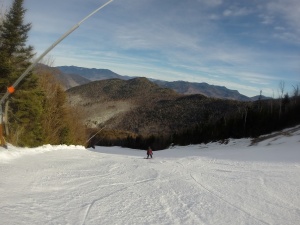 On day three, the sun decided to show itself

Sticking around for a few more runs after my friends departed allowed me to chase a little vertical, visit a few different trails, and overall satiate the skiing fix. More so, it provided a nice balance to the day as I got to catch up with friends while skiing cruisers and riding the lifts in the morning (side note: is there a better place to catch up with people than on the ski lift?  It’s too cold to play with your phone and in most cases there are no other distractions around, so there’s really nothing else to do other than talk to the people sharing the lift with you) and indulge in a little more fast-paced skiing in the afternoon.

Perhaps the best part of the ski weekend though is returning to the ski house (or condo in this case). Sticking around the mountain a little longer than my friends allowed them to prepare for the evening, as I enjoyed the goods on the mountain. Upon entering the condo, the fire was already roaring, a lasagna was warming in the oven, beers were chilling in the fridge, football was on the television, and there was no line for the shower…a stark opposition to my standard ritual: change in the parking lot while sucking down a celebratory beer, grab some fast food on the way out of town, and try to ignore the smell of your ski boots during the long ride home.

The ski weekend means different things to different people and I don’t think any one version of it is more valid than another. In the end, as long as you’re getting outside and having a good time  then you’re doing things right. I for one greatly enjoyed living on the fancier side of things for a weekend and look forward to doing it again.