November, I am Sorry

I am sorry. After weeks of watching ski movies, seeing western resorts get dumped on, and tuning my skis in preparation for the season, I was at my breaking point and I lashed out. While there may be some truth in my last post, in hindsight I really don’t have that much against you. I was just anxious to push past fall and get to winter. 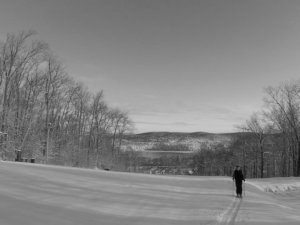 It’s easy to get lost in the middle weeks of November, when the cold has arrived but the snow hasn’t. I tend to forget that the first week of November is typically when everything aligns for perfect rock climbing weather, presenting us with some of the nicest climbing days of the season. November is the time when crowds thin, bugs are long gone, and friction increases. But as my thoughts rapidly turn toward ski season, I find myself less anxious to send, more willing to let projects wait until spring, and feel an overall contentment with “just climbing.” Early November days are where it is still warm in the sun and cool in the shade, and as we ebb toward the end of the month, I forget about the delightful warming feeling of stepping out from the boulders into the sun’s comforting rays. 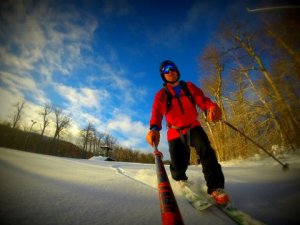 What is the point of it being cold outside, but not snowy? I have no answer to this question, but it seems to be mid-November’s modus operandi. While November isn’t going to compete with the true winter months for the best ski month of the year, it is often the time of year I find myself returning to the slopes. With resorts scrambling to open in time for Thanksgiving break, most years’ first runs of the season occur in mid-November. Although it is easy to forget about ski season’s humble beginnings by the end of April, and at the tail end of a long ski season, the truth is that ski season often begins in November.

Enjoying the first storm of the season

Last week I found myself disappointed with November, like somehow it had let me down. But looking back, I actually had a pretty productive month having managed to run, hike, and climb a pretty substantial amount. My November got even better after it decided to show me how awesome it can be. The day before having four consecutive days off over Thanksgiving, November decided to dump fifteen inches of snow on the local resort, giving ski season the perfect jump start. While most years’ first runs take place on an icy groomer, this year I laid my first tracks of the season through more than a foot of fresh snow. I followed that first day up by scoring some Thanksgiving morning freshies as well. It turned out I had a lot to be thankful for this year indeed.

Of course I couldn’t go unpunished for my bad-mouthing of November. While the snow provided a wonderful beginning to ski season, it came at the cost of the power. From Wednesday night through Friday night my apartment was without power, which wouldn’t be a big deal if our heat wasn’t electric. By Friday morning our apartment had become so cold, it was hard to escape feeling a little bit frozen, no matter how many jackets you layered yourself in or blankets you draped on top of you. By Friday night, the ski clothes I had brought inside to dry out were still as wet as they were three days prior; it is a small miracle that they had not begun to freeze.

As much as I like earning turns, it is hard to complain about spinning lifts

Fortunately, Friday night the power came back and life returned to as normal as it ever is. I flicked the heat on (something I hate to do) and began warming myself up and drying my ski gear out. I guess I was a little harsh to you November. Thanks for making me remember how great you can be. I am even willing to forgive the power outage, as fifteen inches of snow seems like a fair trade. (Also, I was asking for it.)

First run of the year…not bad

← Why November Sucks!
Gifts for the Apres Skier →

2 thoughts on “November, I am Sorry”