With memories of deep snow, amazing tree skiing, and overall good times on last year’s boys’ ski weekend, anticipation was high for this year’s trip. The idea was to spend five days in the heart of Vermont’s ski country—two days in the backcountry and three days riding lifts at three separate resorts (Smugglers’ Notch, Mad River Glen, and Sugarbush). The only hitch in the plan was that spending five days in the heart of ski country in the middle of winter is expensive…even with all of the skiing already paid for. Luckily, we found reasonable accommodations close to our intended destinations. While the location of our room was perfect, we weren’t exactly staying in a suite. In fact, the room was pretty spartan. It contained two twin beds, a small bathroom, a television, and a desk, with just enough room between the two beds for me to roll out my sleeping bag. 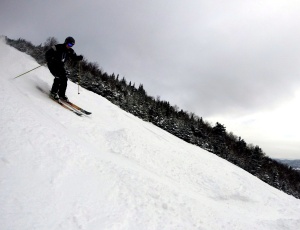 Building on some covert cooking we accomplished in a similar type of room last year, this year we planned on stepping up our food game to avoid spending a fortune eating on and around the mountain. In addition to our ski gear, we also packed a slow cooker and a griddle. Hard to say if it was lucky for us or lucky for the hotel, but thanks to the complimentary coffee in the lobby we left the campstove and french press at home. With pre-made chili, beef stew, shredded chicken for quesadillas, frozen pizza, eggs, sausage, and several other staples, we were good to go. Not to mention we were amply provisioned for aprés activities.

Joe and Jason heading into the Vermont backcountry

The quality of the room that stands out the most is that it was a small space (not particularly well ventilated either), made especially small by us exceeding its reasonable occupancy, and even smaller by the fact that every night we lugged in our ski boots, jackets, helmets, gloves, and a bunch of other gear to ensure everything would be dry for the next day. The room was made even smaller still by the makeshift kitchen we set up in one corner. It didn’t take long for the room to pick up a discernible odor. After our first day touring the Vermont backcountry, we returned to the room and promptly began hanging jackets, base layers, skins, and everything else up to dry. The room quickly resembled (in both look and smell) a high school boys’ locker room. That night, starved from a hard day earning our turns, we made chili and enjoyed a few well-deserved beers in the room.

Getting some freshies at Sugarbush

Upon waking the next morning, I immediately noticed that the ambient odor had shifted overnight (probably as much the chili’s fault as ours) and the room had taken on more of a frat house aroma. Luckily, before having to deal with the smell for too long, Joe began grilling some sausage. Returning from the lobby where I sneaked away with three large cups of free coffee, the room had undergone yet another shift—it now had a scent resembling a diner (perhaps a diner next to a frat house). This process continued over the next three days; each day our ski gear got a little funkier, we cooked another meal, and another block was laid in the smell pyramid we were building.

Joe and Jason on the way back to the car

In a perfect world we could have cracked a window to let some fresh air in (and let some funky air out) but the temperature had been hovering a little below zero and none of us had a stomach for the cold after spending our days subjected to it. Perhaps letting housekeeping in could have alleviated some of the insidious aroma that had built in our room as the days passed, but a fear of our undercover kitchen being discovered had us wishing to keep housekeeping’s prying eyes out of our room. In the end we were never found out, but I have sympathy for whoever needs to put the room back in order. I would suggest buying stock in Febreeze.

← Sunrises, Sunsets, and Why the Golden Hour is a Lie
Five Stages of Winter →