I am humbled by the response I received on a recent piece I wrote for LinkedIn Pulse about the slow demise of Eastern Mountain Sports. The old writer’s adage write about what you know could not be more true about EMS and my relationship to it. The positive response I’ve received from the Pulse piece has encouraged me to once again hold the microscope to EMS; but rather than dissect the company’s shortcomings, it may be more enjoyable to celebrate some of the things that made EMS special to me this time.

Stopping at Saratoga National Historical Park (shortly before blowing the engine on the EMS pickup truck), a place I certainly wouldn’t have visited if not for the EMS Demo Tour

My path to the outdoors and EMS was fairly nontraditional, which is most likely what made my time there feel so special. I was never a boy scout as a kid, my family wasn’t particularly outdoorsy, and I’d only recently discovered a passion for the mountains when I was initially hired. Prior to EMS, I was the general manager of a fine wine store. It was a dream job for some, but I often found myself bored at tastings or wondering what impact an afternoon wine tasting would have on my post-work mountain bike ride. Armed with the knowledge of what I didn’t want to do for a living, I took a management position at EMS, a decision that opened incredible doors for me.

Earning our turns before work at Blue Hill

My first job at EMS is the part of the company’s history that I remember most fondly—most likely because, as time has passed, the bad moments have faded in my memory leaving only the positive impressions behind. This job was also where I developed many of my beliefs on what made EMS great, and how the ideal EMS should be run. The first store I worked in was fun and staffed with incredibly knowledgeable, authentic, and mischievous people. The Muzak was frequently turned off in favor of someone’s iPod, the weekly sale sets were routinely  completed a day or two late, and if a customer came in at the right time, they’d likely find a few employees seeing who could fit themselves into the smallest duffel bag or who could wear the most down coats at one time, or someone suspended from the ceiling in the midst of an “ascending clinic.” Despite the antics, that store always performed well, people liked shopping there, and employees loved working there. 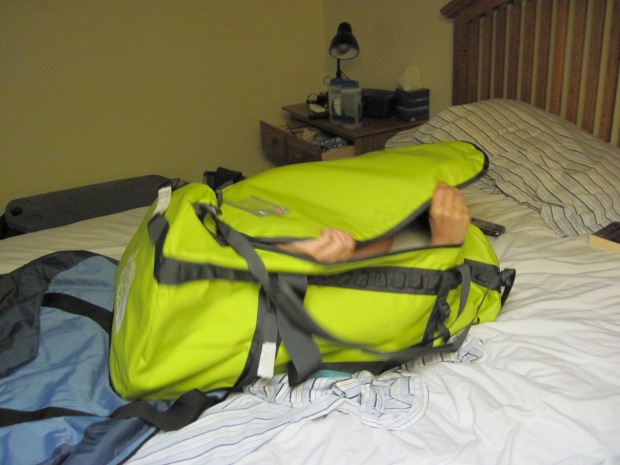 More than just a fun place to work, my first store was also a fun culture to be a part of. Many of the staff got together Tuesday and Thursday nights to climb at the local crag, Wednesday nights were spent mountain biking on the numerous local trails, and Sunday mornings we held a pre-work road ride. When winter came, Tuesday and Thursday climbing was moved to the rock gym, and activities like skinning and skiing at the local hill and climbing whatever ice we could find filled the time we had away from the store. In this store the “work hard, play harder” ethos was lived by nearly every employee. It was during this time that I learned to rock and ice climb, became a better cyclist, learned to ski and snowboard, and made friends that are still an enormous part of my life today.

While I remember the two previous positions warmly, it’s the time I spent on the demo tour that I enjoyed the most. I was lucky enough to spend two summers traveling up and down the east coast acting as a representative for EMS while supporting their annual Outdoor Demo Tour. Even better, I was able to do it with my girlfriend at the time (now my almost-wife). Among outdoorsy-types, the road trip is an almost sacred act, and getting to take two of them on EMS’s dime was a pretty special experience. We saw new places, visited fun cities, and had adventures in locations we most likely never would have visited if not for the EMS demo tour, and solidified our loving relationship along the way—if you want to know if you can spend the rest of your life with someone, a good test is to live out of the back of a pickup truck with them for a while.

Belay group selfie on Lost in the Sun

The news of EMS’s impending bankruptcy has stirred up a bunch of emotions in my circle of friends and amongst my former colleagues. While it’s easy to feel anger, disappointment, or sadness over what the future holds for EMS—if there is a future at all—it’s nice to reflect on the good times, and everything that EMS gave me. After all, I can’t imagine where I would be today if it wasn’t for EMS.

← An Inside Look at Getting Outside
5.14 on Twizzlers and Skittles →